The roman town of Salobreña 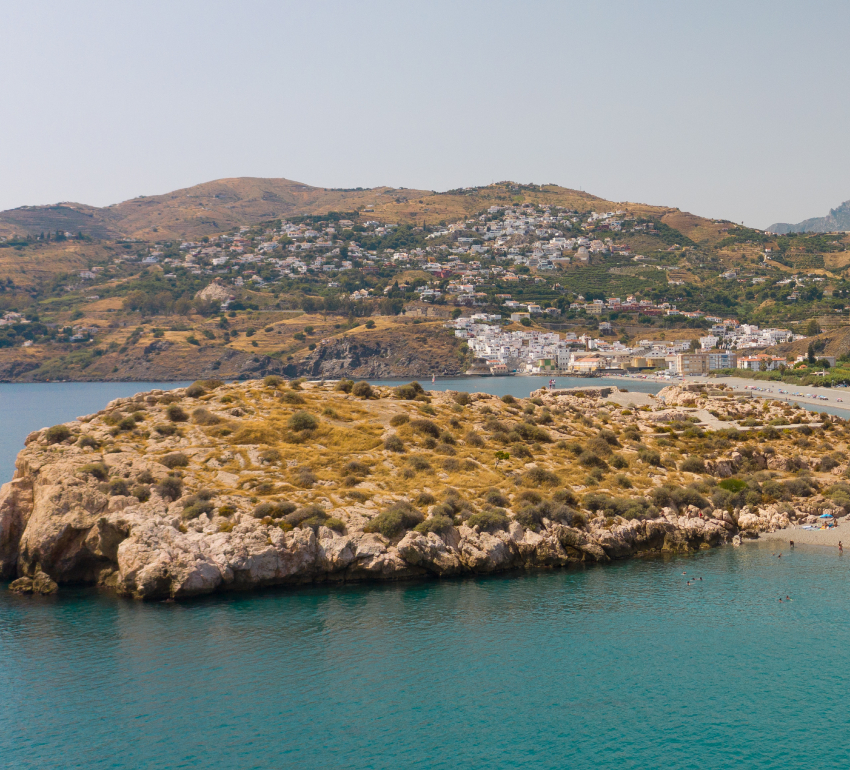 The Roman town of Salobreña

Sel/Selambina, Salobreña (I bC – V aC)

The history of the Roman Selambina has a lot to do with its privileged location. The first settlements are dated back to the Prehistoric Ages. This coastal town was placed between the rock El Peñón de Salobreña, which was an island bordered by the Mediterranean Sea and the Hacho hill (Monte Hacho) – located in the northern side of the town. These geographical points constitute two of the most important archaeological sites of this unique Granadian town, where many Roman archaeological remains have been found.

The first literary reference we have about Salobreña was written in the 1st Century, in the encyclopaedia “Natural History” by Pliny the Elder (book III, 3, 8), naming it as Sel:

A century later, the author Ptolemy, named the town as Selambina in his main work “The Geography” (book II, 4, 7) between Sexi (Almuñécar) and Abdera (Adra) (Márquez Cruz, 2005).

Salobreña was a minor town back in the times of the Roman Empire with a geostrategical position. There were two natural ports during the Ancient Age which we know about because of geoarchaeological explorations.

As far as we know, along the coast of the Roman Andalusia, we may suppose the existence of a Mediterranean maritime network: there were support points for the navigators as well as the existence of commercial facilities where they would offload all the products from around the delta of the Guadalfeo.

Amphoras, ceramics, salted products, wine, oil and other raw materials would have been exported from small ports or quays. This means the point of departure of this trade would have been related to Selambina and it probably would have been located between La Caleta and El Gambullón, according to different studies carried out. A Phoenician quay was also establisehd in Selabina, in the Portichuelo area, close to the City hall and Auditorium. (Arteaga et alii, 1992).

Thanks to all this information it is possible to think of Sel or Selambina as a vicus (Sánchez, 2011), a rural settlement characterized by having an indigenous past with certain autonomy. This settlement kept humble urban features characteristic of an indigenous urbanisation preexisting to the arrival of the Romans. Due to all this information, Sel or Selambina can be seen as an important settlement in the region. However, even though the area of lower Guadalfeo had an important pottery production network and many fishermen, farmers and traders, the benefits were mainly for the nobility living in Sexi (Almuñécar) or Iliberis (Granada).

According to archaeological records and the study of the amphoras, we can see that a great quantity of pottery was found in the region, but the only ones that have been partially studied were from Los Matagallares.

According to the research director of Los Matagallares research, Darío Bernal (Bernal, 1998), there were two main export routes: the first one was headed to Gaul and on this route a sunken ship was found next to the mouth of the river Rhone. Granadian wine was transported from this are along the river Rhone to important Gallic cities like Vienne, Lyon and Arles, even reaching the border of Germany. (Martínez et alii, 2015)

Apart from Los Matagallare’s pottery, there are also archeological remains of the Early Roman Empire in other potteries and villas in Salobreña. Some of them are Los Barreros, Loma de Ceres, Cañada de Vargas and, especially, in El Peñón de Salobreña.

An important collection of coins, many of them belonging to the Early Roman Empire, has been found at the Peñón rock settlement.

Salobreña was part of Rome until the Fall of the Empire and the invasion of Germanic peoples in the year 476 A.D.